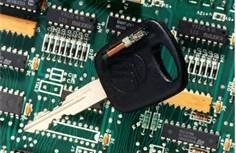 When the key is turned in the ignition cylinder, the car's computer transmits a radio signal to the transponder circuit. The circuit has no battery; it is energized by the radio signal itself. The circuit typically has a computer chip that is programmed to respond by sending a coded signal back to the car's computer. If the circuit does not respond or if the code is incorrect, the engine will not start. Many cars immobilize if the wrong key is used by intruders. Chip Keys successfully protect cars from theft in two ways: forcing the ignition cylinder won't start the car, and the keys are difficult to duplicate. This is why chip keys are popular in modern cars and help decrease car theft

Take a look at our unbeatable prices.